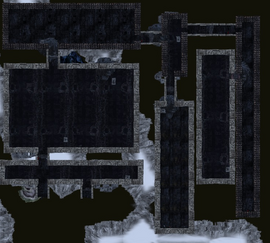 The Alien Ruins are vast, underwater caves that the player can encounter in Barotrauma. They are most commonly found embedded into rocks and ice found underwater.

Alien Ruins are made up of long corridors and vast rooms of incredibly thick blocks. These rooms are particularly massive, possibly implying that their creators were larger than humans, with similarly large doors. Notably, these doors cannot be opened by conventional wiring, so attempting to make a submarine out of alien parts (as seen in the gallery) is all but futile. These ruins are often inhabited by a sole Fractal Guardian which can be a notable threat to an unprepared player. As always, a Diving Suit is required and a small Shuttle is recommended to get into an entrance of a ruin.

This trap features a motion sensor activated turret that periodically switches on and off. It is powered by an Alien Power Generator, and can be disabled by removing the Alien Power Cell within.

This obstacle features a door locked by a simple puzzle. It has 3 buttons, each of which toggle one or more of 3 lights. When all 3 lights are lit, the door opens.

This door has 2 lights beside it. One of the lights periodically turns on and off. When the button is pressed while the light is turned on, the second light lights and the door opens.

This room will have several monsters in it. Possible monsters include: Fractal Guardians, Crawlers, Husks

As well as the following Artifacts, the Alien Ruins can very rarely contain an

Ancient Weapon, the strongest handheld weapon in the game.

Artifacts is the term given to a series of relics left behind by extraterrestrials on Europa. They are frequent targets of salvage missions in Quest Mode, and are potential sources of rare raw materials. Both the origin of these artifacts and their purpose is unknown.

Each artifact tends to have dangerous effects on their environment; for lack of understanding, they are impossible to prevent and can only be worked around. It is unknown how much of it comes from their intended function, normal side-effect of their working, or degradation sustained due to a lack of upkeep.

Five sorts of artifacts have currently been recovered from Europa, distinct in appearance, composition and effect: Psychosis, Faraday, Skyholder, Nasonov and Thermal.

Amongst the alien ruins, the player can find various other items inside Small Alien Chests and Large Alien Chests.

Alien Pistol is a ranged weapon that deals Burn Damage and inflicts Psychosis.

Ancient Weapon is a ranged weapon that deals Burn Damage and high damage to structures.

Alien Flare is a bright and long burning Flare item.

Alien Trinket is a minor artifact that deconstructs into an

Alien Curio is a minor artifact that deconstructs into a

Alien Ornament is a minor artifact that deconstructs into a