Barotrauma's time period takes place several hundred years in the future, during an era where humanity is technologically advanced enough to achieve manned interplanetary space travel.The setting of the game is on Europa, one of Jupiter’s moons, which has become colonized during the space age. Due to the surface of the planet being too irradiated for survival, colonies and outposts have been established under the layer of ice which covers the surface of the moon. Beneath the ice layer is a vast ocean used as a transport network between colonies and as a source for natural resources. The ocean also allowed for the creation of transportation shafts which interconnect the colonies throughout the moon. The ocean itself is inhabited by a number of aquatic creatures, as well as natural forming cave systems.

The primary goal in the Campaign of Barotrauma's game types, is to maintain and build a submarine. This is done by hiring and controlling all of the crew members individually. Each crew member can be given a specific job; the job chosen affects which skills the character excels at and performs badly in, although the actual percentage is randomized within a set range. In addition, Barotrauma also has what is arguably the antagonists of the game, aquatic-based creatures which are capable of damaging your submarine and killing your crew, both intentionally and by consequence of damaging the ship. The secondary objective can be considered defending the submarine from these creatures and repairing damage by them before your ship sinks. The game also features other game modes, with different goals or styles.

The inventory consists of 15 slots (Medics cloth have 3 extra slots). Five of those slots are for equipped items, as indicated by the icons displayed on them; one slot each for headgear, torso clothing, headgear, an ID Card and a suit. The other ten slots house any unequipped items.Items can be equipped by clicking twice on them or click on the small bar on top of each item icon, you can also use numbers. Some items can take up multiple slots due to their size: the railgun shells, for example, require both hand slots to carry, and the diving suit takes up the suit slot.

On campaign this allows the player to purchase items, ammunition, electrical components, new crew members and certain installations. The supplies are purchased using credits, which are a form of currency that is rewarded to the player after successfully completing a task in quest mode. In multiplayer mode however you cant purchase new crew members. 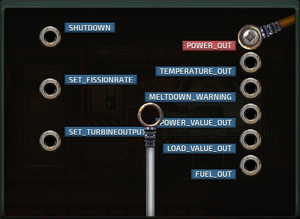 In order for any item in the submarine to work correctly, it needs to be wired. To enter the wiring system in game all you need its a screwdriver, and then press E in any item, there you will be able to modify the wiring (It can be disabled in server configurations or inside the sub editor). When you are inside the wiring system, you can remove wires by simply clicking and arresting it out of the plugin, but it wont remove the wire completely. To remove it completely you have to unplug it in both items and drag it to your inventory or outside of the wiring system UI. If you just remove one side of the wire, it will disable work as expected, but it will leave a wire bouncing which can create sparks that generate sound, it can be seen or heard by any player. To add a new wire to the plugins, you have to be holding any wire, it should appear automatically on the UI, then you just drag it to the plugin for both items. Add it in-game wont look fancy but a upcoming feature for that its coming in future updates. Wiring in the sub editor its similar to wiring in-game, although you have control of the shape of the wires.