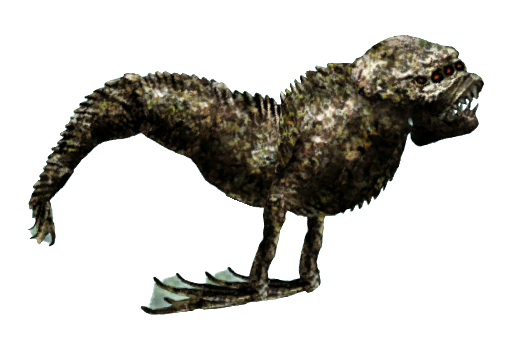 The Crawler is a creature somewhat resembling merfolk, but twisted into a grotesque form. They are one of the most common creatures around the ocean in Barotrauma.

Crawlers are relatively small and agile, and are one of the few creatures capable of entering the Submarine. They possess four pairs of red eyes, green skin, segmented spines on their back and multiple hand-like appendages, with only the frontal ones having a functionality, allowing them to latch on surfaces, swim and crawl (hence their name).

Crawlers normally appear in small groups of 1-4 individuals (upper/lower limit depending on the local difficulty), compensating their individual frailty, but they can be seen in large swarms of 8 or 15 individuals in specific Terminate a Swarm missions.

Due to their size, Crawlers don't do much damage to the hull of the submarine, but their size allows them to easily fit inside a breach. Should they find a way in, they can become a danger to the crew.

Crawlers can be a nuisance as they often target an area of a submarine's hull that is not within line of sight of its defensive structures. There, they will often latch on to the hull and will gnaw away at it, causing constant leaks. This can be avoided with good positioning of the submarine on the Captain's part as well as using the submarine's electric discharge coil if available. Especially troublesome crawlers may also be smashed between obstacles in the environment and the submarine to great effect.

Multiple Crawlers can be a serious threat to a lone diver. If ambushed, the diver may be stunned from the attack long enough for the Crawler to retreat to avoid retaliation, opening up opportunities for other Crawlers to attack from different angles.

Crawlers can also claw their way through doors (though they take a long time to do so). Since Crawlers can only board the Submarine through hull breaches, it's recommended to wear a Diving Suit to protect oneself against the Pressure.

Crawlers are the second weakest creature in game, only behind the Hammerhead Spawns. Crawlers have a total of 65 HP, are vulnerable to bleeding damage, and don't have any kind of protective shell or armor, which makes them perfect targets for Coilguns.

Crawlers are not picky eaters, and they tend to rapidly crowd around and consume any corpse (including the corpses of other Crawlers, which makes them opportunistic Cannibals) over attacking the Submarine. This can be used to one's advantage if dispatching them from the safety of a Railgun or a Coilgun, but it does not apply to Divers, as Crawlers prioritize attacking players over eating. While eating, they will quickly regenerate any previously lost vitality.

They will also flee at very low (<10) health, forcing the Submarine to chase them if part of a Mission. Fortunately, most weapons will outright kill them before reaching this point, if not bleed them to death.

Killing a Crawler allows the Crew to extract one unit of Alien Blood from its carcass (simply [G]rab its body, and take the item from their inventory). Alien Blood is a medical reagent necessary to manufacture Blood Bags.