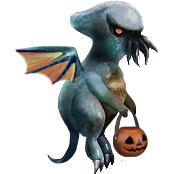 The Cthulhu is a Pet.

The Cthulhu possesses an octopus-like head whose face is a mass of feelers, though its body is of a dragon with a pair of wings and a tail. This is the only Pet that floats by flapping its wings instead of undulating along the ground like other Pets' sluggish movement.

For Halloween, it holds a Jack-o'-Lantern Trick-or-Treat basket in its arm.

Unlike other Pets, the Cthulhu is mute, making no sounds whatsoever as it has no audio.

The Cthulhu has two inventory slots that can be accessed when alive and grabbed by the player. Any small items can be stored here, but mostly one of the slots is for the

There are three Pet Food types that Pets can consume: type 1, type 2, and type 3. Like the Psilotoad, the Cthulhu can only eat Pet Food type 2. However, it satiates only 10% Hunger, but still increases 5% Happiness. Therefore, the Cthulhu requires a larger quantity of Food to fully sate its Hunger compared to other Pets.

Items that are classified as Pet Food type 2 include:

The Cthulhu's Happiness decreases by 0.016% every second and can be increased by being fed or played with. There is a 6 second cooldown before the player can play with it again.

When well-fed (0-30% Hunger), the Cthulhu will start producing some items, most commonly a pile of

Strange Egg, which can be deconstructed for materials or used to hatch another Cthulhu. Other than that, it has no other unique items to produce like other Pets.