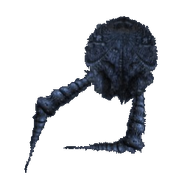 The Fractal Guardian is a Europan creature. It is the only creature besides humans to have multiple variants.

Two variations of the Fractal Guardians exist. The first has three spike-like limbs that allow it to swim, two on the sides of its head and one at the end of its segmented body. Its body consists of four segments, including its head. Each segment appears to have two holes.

The second type possess an orb-like carapace with two spike-like limbs on its underside. Due to their heavy torso and the fact they only possess two limbs, they are much slower than their worm-like siblings but can withstand more damage.

Rather uniquely, Fractal Guardians will attack and kill crew members, but will ignore submarines. However, they only spawn in Alien Ruins, meaning one must confront them in person. In this case, it is best to bring something capable of stunning the Fractal Guardians, although they can be defeated with an Ancient Weapon if you're lucky enough to own one.

While multiple Fractal Guardians can spawn in any given Alien Ruin, they typically do not spawn in close proximity.

As Fractal Guardians possess an extremely small attack delay, it is prudent to bring medical support on ruin expeditions, and vital to bring some means of defense.

An NPC conversation mentions that fractal guardians are, quote, "not organic - closer to a robot than an animal". This could explain how they survived the presumed extinction of the alien species behind ruins.