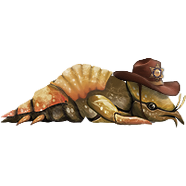 The Orange Boy is one of the Pets added in Vanilla 0.10.6.0 as part of the Halloween Update: Creepy Creature Feature.

The Orange Boy appears to be some type of crustacean with big flaps for limbs.

Its Halloween outfit is the sheriff costume, which is mainly the sheriff hat with a star badge attached to it.

The Orange Boy has two inventory slots that can be accessed when alive and grabbed by the player. Any small items can be stored here, but mostly one of the slots is for the

There are three Pet Food types that Pets can consume: type 1, type 2, and type 3. The Orange Boy can only eat Pet Food type 3, which satiates 50% Hunger and increases 5% Happiness.

Items that are classified as Pet Food type 3 include:

The Orange Boy's Happiness decreases by 0.016% every second and can be increased by being fed or played with. There is a 6 second cooldown before the player can play with it again.

When well-fed (0-30% Hunger), the Orange Boy will start producing some items at a specific rate, most commonly a pile of

Poop. At 50% Happiness and beyond, it may produce the

Chitin Chunk. At 80% Happiness and beyond, there is a 15% chance it will lay the

Strange Egg, which can be deconstructed for materials or used to hatch another Orange Boy.