The pump is an installation found in Barotrauma. It is used to pump water out of or into the submarine.

The pump's primary function is to filter water in its given area. By using the pump, a small menu will appear in which the player is able to manually activate/disable the Pump and modify both the direction the water is being pumped into and the speed at which it is being pumped. For instance, setting the pump slider towards IN will cause water to flood into the Submarine, while dragging the slider towards OUT will pump water out of the area. The slider can be adjusted to regulate the Speed at which the Pump interacts with Water.

The pump's direction can also be modified with the input set_targetlevel (usually linked with the Navigation Terminal's velocity_y_out). This input allows the player to modify the current level of water in the pump's area. The input can be a decimal value between 0.0 (meaning the water level will be 0) or 100 (meaning the water level is at the highest it can be). When an input is set, the pumps direction is automatically set and it will begin gradually lowering or raising the water level to the desired target. This change is not instantaneously though, as it will take the pump some time to reach the designated target level.

In addition to the obvious use for the pumps, to pump out water when a flood occurs, they can also be used to pump water into the submarine to make it heavier, or to extinguish Fires.

As of the Steam Release, the normal Pump is often used as part of the Ballast, and linked with the Navigation Terminal to automate the process, while the Small Pumps are used in Airlocks and spread throughout the Submarine, and may be linked with a Water Detector to automate its use, or require manual interaction. 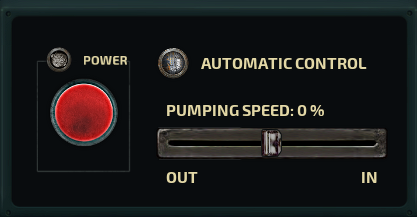