A Thalamus is a stationary botanical entity that infests shipwrecks and attempts to attack foreign bodies. When a shipwreck is infested by a thalamus, its exterior and interior will be lined with various Thalamus "organs", and may pose a threat to any ship as well as its crew depending on what these organs are. Usually, a thalamus will initiate an attack by pulling in unsuspecting submarines with its tentacles, and injecting Terminal Cells with a hull-piercing spike. It can also operate the shipwreck's offensive and defensive weaponry, posing a notable threat to any individuals in its line of fire. In order to free the submarine from the Thalamus, players will have to destroy various organs inside the shipwreck with weapons or tools. 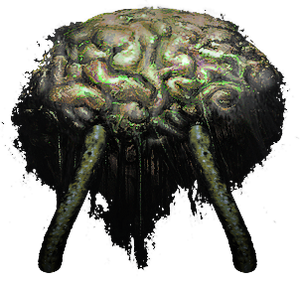 The Thalamus Brain is the core of the Thalamus. it controls all of the other parts and when destroyed, everything else will die with it. Destroying the brain is the only way to stop the Thalamus from firing the ship's installations such as the Coilgun, Railgun, and Discharge Coil. Its location is completely random, and it will never spawn in a room with open gaps. This makes it somewhat more difficult to locate than the other organs. 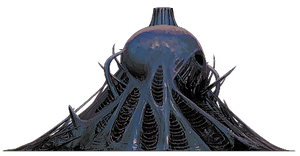 The Flesh Gun is a weapon used by the Thalamus to trap passing submarines. When in range of a submarine it will shoot out a tether and pull the attached vessel towards it. The flesh gun itself cannot be destroyed, but its tendons can be temporarily snapped with enough damage to their ends. The tendons will naturally snap and reapply themselves after a certain period of time, but will reapply quick enough so that a getaway is infeasible. 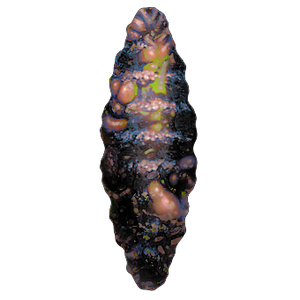 The Flesh Gun Ammo Sack is where "ammunition" is stored for use by the Flesh Gun. Typically stored beneath the fleshguns, these sacks can be destroyed to disable the tendons and free any tethered ships. This is the easiest way to escape from a Thalamus if looting the wreck or the organs is not a priority.

The Flesh Spike is a form of "melee" weapon used by larger wrecks infested with the Thalamus. When the sub is near the spike will shoot up and through the submarine damaging and destroying everything in its path and injecting terminal cells into the submarine. The flesh spike will repeatedly do this until a limit of alive terminal cells have been reached. It can only be permanently disabled by destroying the brain, but destroying the fleshgun sacks and distancing the sub will render it useless. 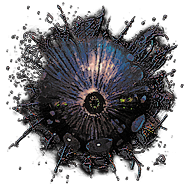 This is the Thalamus's form of immune system. When activated, it will start spawning Leucocytes, which will then float towards the player and attack them, causing paralysis. There is a limit to how many Leucocytes can be alive at one time inside of the shipwreck, but the limit is notably high. This organ can be destroyed to make it stop spawning Leucocytes. There are usually multiple cell spawn organs.

This lump of flesh is one of the organs of the Thalamus, when destroyed it will have a few items in it such as alien blood and swim bladders that can be looted.

A Thalamus can be a challenging obstacle, especially for inexperienced players who are overwhelmed by the sudden and usually surprising attack from a wreck. Thalami can either be boarded and killed, or shot with piercing ammo in an attempt to hit what's on the inside. Boarding is typically the most dangerous way to kill a Thalamus, but is usually what players will be forced to do if they have already been pinned by a Thalamus, lack piercing ammunition, or are generally in a chaotic state of emergency. Before entering a Thalamus, it is advisable to bring lots of ammunition and Anaparalyzant. Because the defensive Leucocytes are swarm creatures with low health but high numbers, weapons with high rate of fire like the SMG are generally preferable. A melee weapon that does high item damage should be brought in order to effectively rupture organs. Optionally, explosives such as grenades can be brought for the same purpose. Melee weapons for Leucocyte combat are inadvisable; Even with paralysis resistance, many Leucocytes can swarm and stunlock a player who gets too close. Plasma cutters, and other wreck salvaging and hull-breaching equipment are a must. Before leaving, always do a final check to make sure you have everything. It is not infrequent for players to have forgotten something, and be killed on the way back to get it.

When approaching the Thalamus from the outside, be wary of any turrets or discharge coils on the outside. You may have to find detours or cut into the ship if an offensive installation is in the way. When breaching the Thalamus, you can either choose to look for its flesh sacks or its brain. The brain may be a better option if your sub is having difficulty with terminal cells on board, and the flesh sacks may be a better option if you are in a hurry and just want to get free. On encountering a room with a cell spawner, you can choose to either avoid the room through detours, or destroy the cell spawner. If you try to destroy the cell spawner, do not become overconfident. Use your Anaparalyzant as soon as possible, as it will provide paralysis resistance. If you opt to only destroy the flesh sacks, be mindful on the way out of turrets and Leucocytes that have escaped into the open waters. Once the brain is shredded, all hostile functions of the Thalamus, including its antibodies, will be rendered harmless.