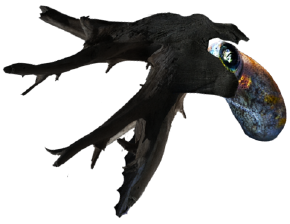 The Watcher is an octopus-like Europan creature named after its large eye. Despite its startling appearance, it is docile in nature and will attack neither submarines nor their crew members unless provoked. Once riled up however, its resilience makes it a dangerous foe.

As of the current Early Access Steam build, Watchers will not naturally occur as they are outdated mobs from legacy. However, they are still present within the Vanilla 0.9 Content Package, and can be spawned in with the identifier `watcher`.

Watchers have 6 limbs and a large protruding head. Having no specialized appendages dedicated to swimming, they are exceptionally slow-moving. Their limbs are black and their heads are multi-colored.

Watchers are visually-oriented animals. Their iridescent head's main feature is its large eye, giving them splendid vision; on the other hand, they suffer from deafness.

Watchers' heads are completely armoured on all sides. Attacking the head will only inflict 1/10th of the damage. They also possess a shell articulated at the base of the head, but this doesn't appear to offer any actual protection.

Watchers are passive but inquisitive creatures: despite having no desire to attack the submarine or its crew, Watchers will still approach the ship to gaze at human activities through any windows. They become aggressive once attacked and then proceed to repeatedly ram into humans and submarine alike.

Harming a Watcher is made difficult by its relatively high health and armored head. It is recommended to aim at the limbs for maximal efficiency.

Taking this into account, the proper course of action during an encounter with a Watcher is to avoid engaging a fight.